On Leaving Africa: Migration in the 21st Century

by Ada Okoli
in Uncategorized
0 0
0

Update: The outrage over the exposed Libyan slave auction in Libya has sparked much needed public outcry about the fate of African immigrants. This is a take on modern African migration from a Nigerian perspective.

There’s a popular joke that says: “The Nigerian dream is to leave Nigeria.”

While that may be a reach, it’s a fact that between January and May 2017 alone,  over 10,000 Nigerians died while trying to illegally migrate through the Mediterranean Sea and the deserts.

And those are just the available stats for the first half of this year. For illegal migrants, who have died. So think of how many more casualties exist in total.

To put this figure in perspective, the U.S. remains the top country in the world for receiving migrants, taking in up to 989,900 legal migrants in 2013 and with a net immigration rate of 3.1 per thousand.

All things being equal, this index should give a picture of a country’s well-being and if a lot more people are going out than coming in, then that may be some cause for concern.

In reality, migration involves different push and pull factors that revolve around social, political, economical, and environmental factors according to Migration Trend. The general picture is that people naturally diffuse from unstable areas to places where they can lead better lives.

Here’s a clear idea about the top destinations for Nigerian emigrants: 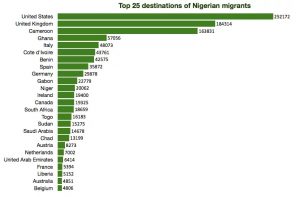 The U.S. – no surprise here – is the single most visited country on the list. However, the bulk number of Nigerians migrate to other nearby African countries, for clear geographical reasons.

According to World Bank data, there are 1,117,000 Nigerians living abroad in total – but obviously those are just the ones with Nigerian passports. For example there are 3.2 million Nigerians in the United States. However, only 252,000, or 12%, still carry their Nigerian passport. That means 88% have opted for their host country citizenship.

Over 1 million Nigerians live in London. The UAE and various parts of Asia also have their own fair share of growing Nigerian communities there too.

Immigration itself is not a problem. In fact, it is a  normal part of urbanization and globalization. However, it becomes a problem when all of the youth of a country have their minds set on nothing more than to leave. This article in Vanguard captures the attitude of most Nigerians to leaving the country. Should one set out to interrogate the conditions that create the desperation to leave the country, one would find it is an interesting combination of Political, social and economic factors at play.

First and of immense importance, we live in a country where many are not only poor but cannot find jobs because unemployment is steadily rising. The chances of finding a livable paying job as a graduate are rare, so what are the hopes for majority of the largely uneducated population? Worse still, upward social mobility is almost non-existent and education, it’s best vehicle is being largely ignored.

For those who engage in enterprise or are creatively inclined, Nigeria is not the easiest place to thrive.  Although – hurray – the country recently moved 21 places up World Bank’s ease of doing business ranking, it is still 145th out of 190. Besides, ironically, such improvements are never really felt  by the small – medium businesses who need it the most. In short, 80% of everyday business owners in Nigeria are put out of business within  3 years.

Since the prominence of Boko Haram, many Nigerians have left the country to declare asylum both in neighboring African countries and places further away like North America and Europe. A large proportion of these recent migrants are young people and families, finding themselves in foreign countries; some return, others do not.

There are also social undertones to some reasons for leaving the country. In Africa generally, there is a sort of prestige attached to ‘abroad’; the foreign or white man’s land. People actually use travelling abroad as a yardstick of social status, they travel to study or for medical reasons that should normally be treated at home.

For some of these ones, living outside Nigeria is enough success, even if they are worse off on arrival – which is often the case, according to this news article. Earlier this year, we were troubled with reports on the abuse of other African immigrants in South Africa and the crisis in Libya has shown us again, that the fate of many Africans who leave for greener pastures is discouraging – with many being trafficked or forced to work odd jobs in incredibly shitty conditions.

But for those who are lucky, or perhaps manage to make it to favorable tides, the glimmer of hope is the self promoted notion that Nigerians are resilient, and stand out in all walks of life in the places we go. A recent example is 20 year old Kayode who broke an academic record in Poland this year – Kayode and many more like him are considered in Nigeria to be proof of the Nigerian ‘excellence’ factor which many believe will only manifest when they leave the country.

Those who leave to become citizens elsewhere come from all social strata – the middle class, the newly rich, old rich and the very poor, all with one thing in common – they see a bleak future for themselves at home. It’s easy to see why. A lot of things are only staying the same but many are only getting worse. The population is increasing meanwhile more than half remains uneducated. The region’s politics, despite trendy new policies promoting youth inclusiveness, is still not accessible to the people. We are under the governance of the same old leaders who have tried to mortgage our futures for their pockets.

In the midst of all this, there are those who refuse to abandon hope. A lot of perceptions are evolving. 47% of over twenty respondents voted in a twitter poll that they would choose to stay and ‘fix’ Nigeria rather than relocate abroad if they had the chance. This hope for the future may be what will keep us going years from now. Like someone said “the things we are reaping now are a result of the foundations laid long ago. The future we want to see, has to be laid today.“

Update: Sugar Rush is back in the cinema.