The only thing better than great music is exceptional live music and I say this with the greatest deposition. I have big questions, and they need the right answers; how do you meritoriously trap magic in words without sounding completely ridiculous? Because I don’t think I can do my evening justice.

On Sunday the 27th of May, Efe Oraka and Cheso headlined their first show at The Treehouse Grill, Abuja, and it was nothing short of enchanting. I rarely have expectations, because disappointment isn’t a face I’m comfortable with.  I’ve been lucky to watch the two headliners a few times so it was difficult not to expect that I would have a great time.

The show was scheduled to begin at 6:00 pm, but in the spirit of Nigerian tradition, we started a little later. I’m not even going to front, even I, got there a little late. Desperate to get vlog content, I stormed into a TRIBE meeting, possibly screaming at the top of my lungs “where is Efe?!”, thinking I’d meet just the precious angel and her doting manager, stringing her guitar and crooning her ardent single ‘wonderland’. Instead, I was met with a room full of strangers discussing their jobs, lifestyles and just general thoughts on life. The gathering was very intimate, interactive and slightly intrusive, but what the hell, it was necessary.

I had Efe comment on what she was expecting and feeling about her set, she said “excited but I’m indifferent but like I can’t wait cause I’m performing new music that has never been heard before. This music is so new that I don’t even have it”.

My excitement peaked of course, and new faces from all over the city were ushered into the Afrocentric themed room with a plethora of throw pillows, light smiles, and woven mats. The stage area had high wooden chairs for each performer (the exceedingly efficient T-white and Prince on drums and guitar respectively, seated at opposite ends) and Efe’s manager; the charming Mr business was our host for the evening. All seated and eager to get the show on the road, we welcomed Brum3h (pronounced Bru-meh) a singer/songwriter I wish I knew of beforehand. He was simply exquisite, he spoke briefly and amiably to the audience, informing us that this was in fact, his first show in Abuja this year. 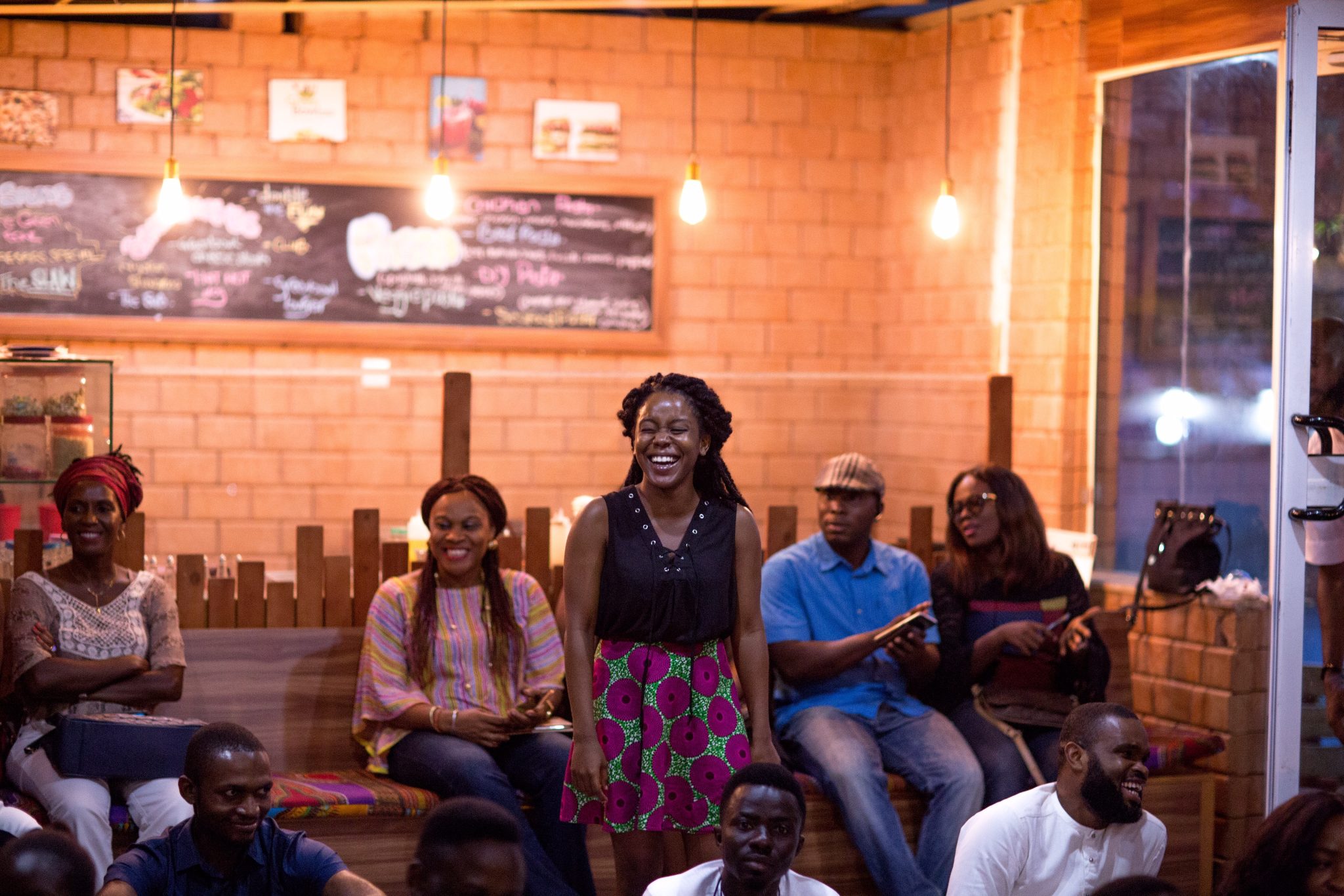 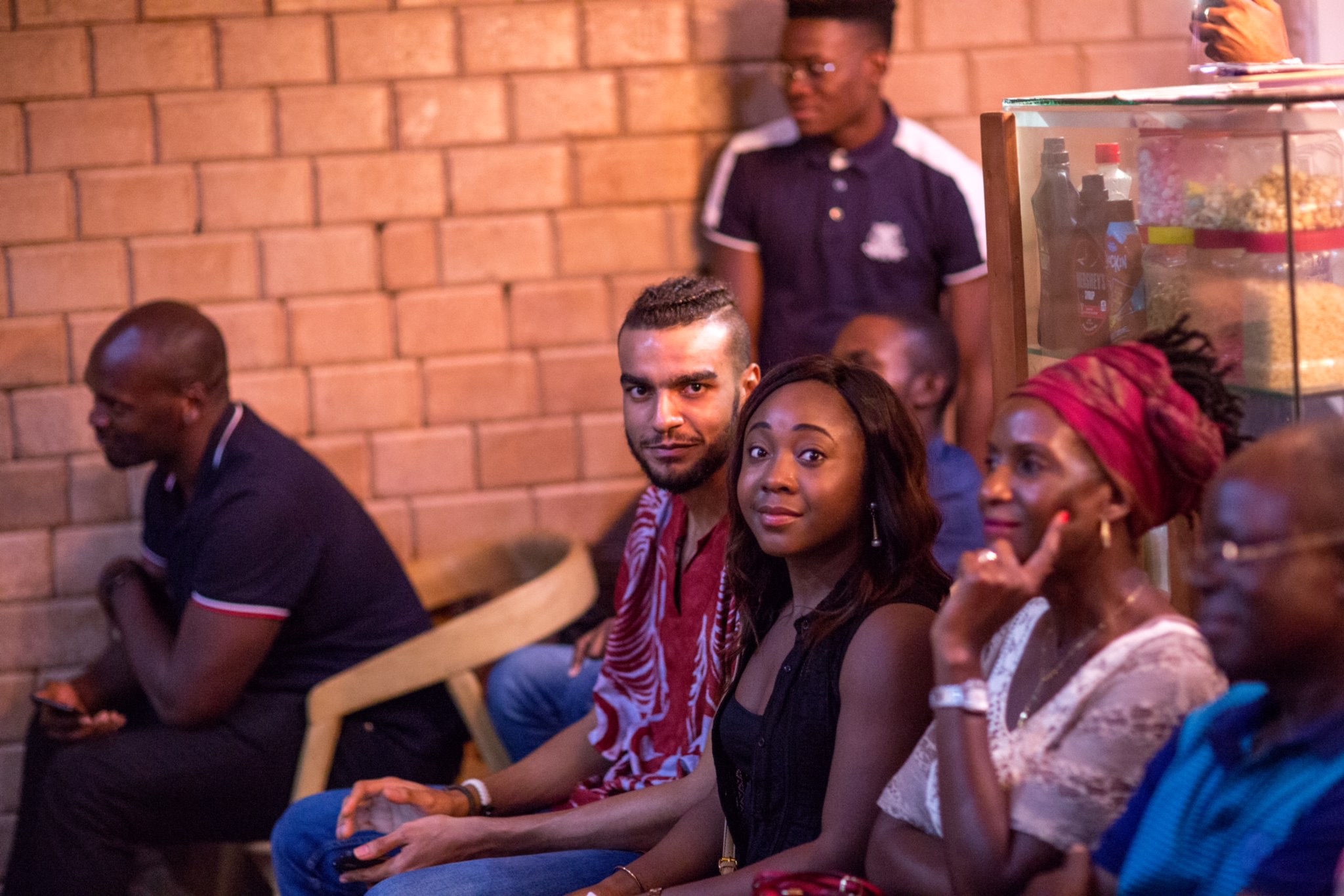 In his somewhat bashful but poised mannerisms, he eased the room into a ravenous calm with the opening chords to his single (off his forthcoming EP) ‘prayer 4 u’, written for friend in the bouts of helplessness by a uniformly helpless friend, crooning kind-hearted lyrics “I know I can’t walk in your shoes so I’ll say a prayer for you”. His next single titled ‘fall down with you’, which was delivered with a staid warning from the artiste, “do not date older women”. It was highly reminiscent of an old heartbreak he and many other men in the room could relate to, one I presume is a farce because everyone knows women are pure light!

With velvet-like vocals, He ended gracefully by “flipping these bodies by the water” in his sensual single ‘lakeside’ (made with absent friend Rookie_sbk). I was blessed.

There was a brief intermission, our host teased us and the mic was offered to the audience, so those high in spirit could be found. Fortunately, a capable man stunned the crowd with his vocal prowess, long enough for me to slip backstage to speak to the captivating Cheso.

He and Efe assured me jokingly while shaking his beaded bracelets in my camera that “spirit go dey atmosphere, anointing go drop, people go fall yakata, na the p be that!”

By the time Cheso’s set began, the room was bursting with the right type of energy and spilling out the door on to the outer extension of The Treehouse Grill (Efe saddened by this went out to pacify her guests, tendering heartfelt apologies and thank-you’s) eyes glaring over potted plants, through the windows to get a glimpse of the magic. He opened, singing delicately of the peculiarity of his love for a certain woman, urging her to stay, on his single ‘Feels’ featuring Bibo. His next song, ‘Serenade’, from his ep ‘The L.Y.L.Y. project’, a compelling love ballad swathed in silken melodies of neo-soul and highlife notes. Efe was crouched in a corner, while Cheso manned his stage, supplying smooth backing vocals as his audience became completely mesmerized by the patent sincerity of his talent. I particularly enjoyed his next song, titled ‘Don’t Mind’, the bubbly tune laced in nothing but pure joy, I believe, was written solely to dance carelessly under stars with lovers. Although our reality was low wooden ceilings with naked steady lightbulbs dipping, we swayed, full and content into his next song. A compelling love duet featuring his co-headliner titled ‘Falling’ also off his EP. Efe was invited to join him on stage and their voices instantly married each other seamlessly, entirely committed to nurturing each distinct contribution, the crowd sang along, utilizing the shekere’s and other local shakers scattered across the room. Again, I was blessed. 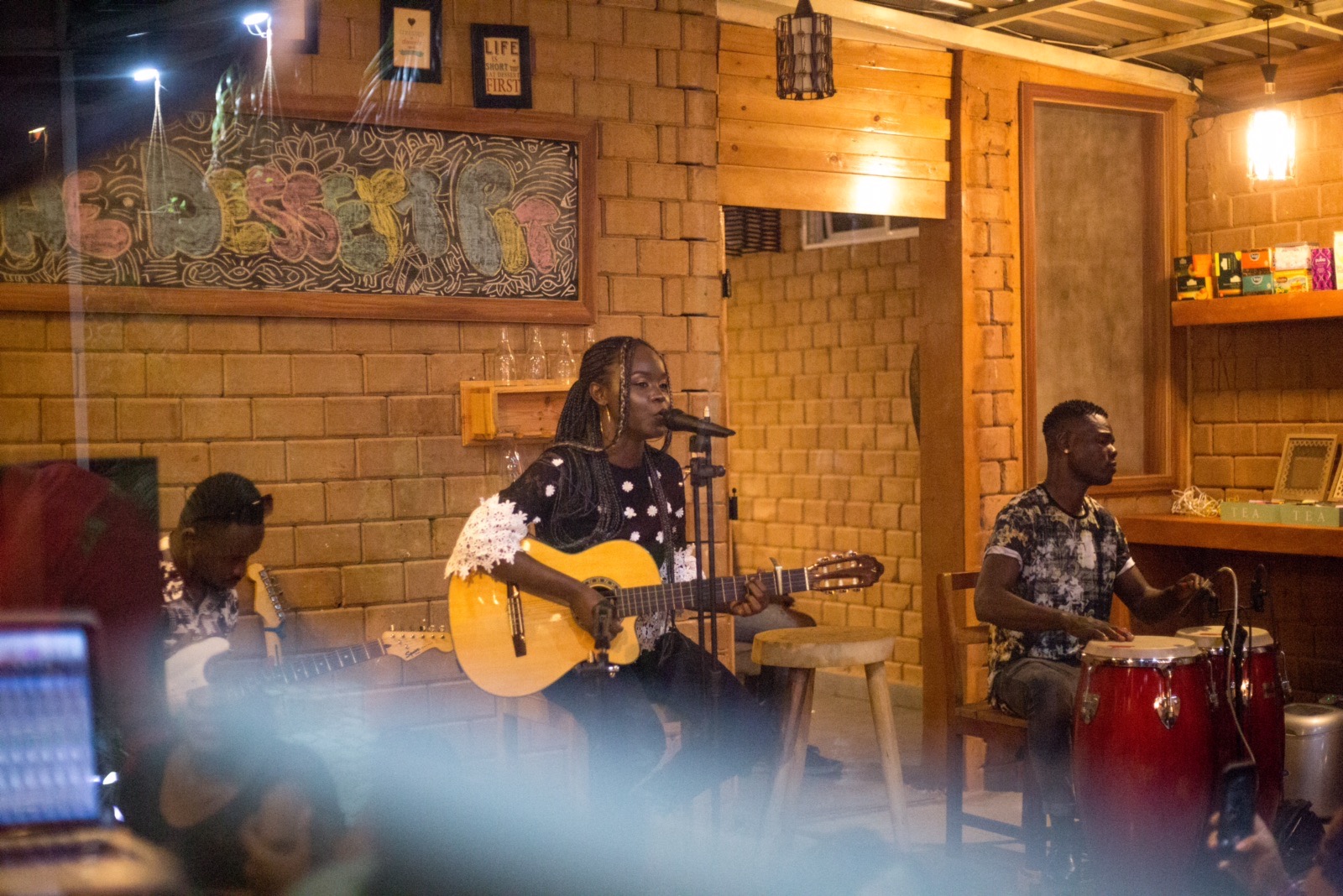 As we prepared for Efe to grace the stage, the room was exposed to humorous conversation once again, the host (also Efe’s manager) was buoyant, comical, and well spoken. He engaged us and prepared our minds for the magnificence we were about to experience, and soon the striking 19-year-old, was seated and ready to go! She thanked her audience for coming, spoke briefly about her forthcoming EP, ‘Magic’ and informed us of the exclusivity her set. New music, new vibes, all guaranteed.

She began with her unreleased single, titled ‘Zion’ inspired by Lauryn Hill’s (who according to Efe is her mother after her mother) ‘To Zion’. The heart wrenching single is to be considered as a sequel to her released single ‘Wonderland’. She begins, crooning of broken promises, lies told and hopeless realization of abandonment. She ably ruses the fleeting trauma of unrequited love and the desperate need to escape the sweet cruelty of love, into her lyrics.

From gripping lyrics like “stuck in this distance, so much for commitment, I just need to find my way back home” to undeniably melodic but pitiful, repetitive lyrics like “Zion, Zion I’m so sick of crying”. The entire song was an all-expense paid tour of a broken heart, a brutal reality shock that loves amongst many other things is finite.

The room, well I, was stiff after that significantly powerful song. As I resolved in my heart, that she is indisputably one of the best and most talented songwriters of the new Nigerian creative scene, she lugs on to another unreleased single, to lift our spirits, titled ‘Comfort Food’, singing drolly, that her “heart’s at the bottom of this bag of cheese balls”. The single is a child-like approach to describing unhealthy coping mechanisms she and many other people indulge in while suffering heartbreaks.

Her next single titled ‘Company’, which according to her was written about God in a time of “despondence and despair”. Cheso joins her on stage with his cowrie adorned shekere. Nearly akin to a prayer, the singer, with remarkable élan, calls onto her God to come to her aid, asking for a definite assurance that his biblical promises of comfort will be kept. The eerie song is guised as fun and optimistic by the electric guitar and drums, informing God of the perils and woes of the human experience, almost as though he was out of touch with the suffering that she endures.

Efe came up with chants on the spot, splitting her audience into two. Offering us, the opportunity to try to best her whilst testing our nonexistent vocal métiers, and try we did! Our competitive instincts kicked in almost instantly, it was practically as though we all had been singing together from birth. The details of who won will be kept private, as the playing ground was not remotely even, I will assure you, however, that even Beyoncé couldn’t touch us.

Another brief intermission and we welcomed the beautiful Keren Happuch, a singer with a show-stopping voice, graced us with ‘Bena’, a derivative of an old folk song, which got the older crowd excited and possibly left them feeling more included. She was a highlight for many and it’s upsetting that I had to take a quick restroom break during her set. Brum3h and Efe, however, assured me that she was stunning all through.

All things must end, the good included. Efe returned to the stage, for the closing encore, with her manager who was kind enough to give us a little taste of his explicit luxurious vocals.

Finally stringing the familiar chords of the highly acclaimed love single ‘Wonderland’, I looked around to find a room full of bemused beautiful people, crystallized in magic like well-cooked wontons. Grown men and women beaming from ear to ear and proclaiming that they too, felt, “like Alice in this lonely town” and thinking they need a “pick me up”, believe me, was a sight to behold. Efe, a spiritually conscious butterfly, and an embodiment of light asked her audience after telling us the sacrifices she has made for her music, to pray… a room full of strangers of different faiths and beliefs, unified in love and unadulterated good vibes.

Our city armies an exceptional caucus of rising stars, and I beseech you, do not sleep on Magic. I’m literally begging you.

All images were taken by Pelumi Obanure.

Op-Ed: Why Are Art Shows In Lagos Boring?