#Dilly: The Art Of African Fashion with Temi Otedola

by Cosmas Akhere
in Pop Culture
0 0
0

There is definitely a motive behind showing my individuality. I always imagine how boring it would be if everyone dressed the same. But then again I don’t think it’s necessary to overthink how I dress. My style is based purely on how I’m feeling then and there.

This is the Temi Otedola sentiment about her personal style, individuality and identity building a particularly stimulating response for me, because in a fashion world packed with saturated themes and institutionalized constructs of fashion passes, a concept like individuality is often thrown out the window for aesthetics and trends.

“It is important to stay in the loop of what the current stories and events are in the fashion industry, but yes, simultaneously I try to stay independent of simply regurgitating trending narratives, especially if I’m not genuinely interested in them.”

With these statements, Temi reiterates the significance of self in search of a fashion identity thus narrowing down the idea of personal style. [love yours]. The fact that she resides in London doesn’t stop Temi from taking pride in her Nigerian descent whilst curating content for her blog, JTO Fashion. If anything, her ethnicity is frequently channeled in her style.

Studying History of Art at the University College London, she juggles her education, creative lifestyle and blog; reinventing herself every couple of months. Temi structures her week around these responsibilities and always plans ahead bearing in mind essay deadlines or upcoming brand collaborations, hence maintaining efficiency at all times. Two years since the inception of her fashion and lifestyle blog JTO fashion, navigating her way in the fashion and beauty world as a woman of color has been rather easy for Temi; at least to a  certain extent.

”I think that the fashion and beauty world is largely more accepting of women than other industries so I have had it fairly easy in that sense. However being a black fashion blogger in the UK, where it is a generally predominantly white field has been trickier to navigate. However, that has also added to helping me carve a niche in the British blogging arena.”

I sometimes imagine how fashion blogging morphs into a viable business opportunity considering how drenched the Internet (social media) has become the past years. How to carve that niche audience, maintain perpetual engagement and monetize from these processes are the questions that come to mind but Temi clarifies them;

”When you’re first starting out, the initial aim is to build viewership and a following that will make you valuable to a brand. No one starts out with thousands of readers or followers – you need those first few months or years to build a niche and following so brands will come calling for your influence and ability to reach a certain audience”.
Playing by her rules, Temi remains true to her underlying principles by creating sartorial synergies with a Nigerian spirit.

Temi also believes in the idea of fashion imitating art; ‘art is fashion and fashion is art‘. Placing that in context of African fashion, she explains; ”What I meant by that was a comment on how fashion has been influenced by many art forms, whether it be painting, sculpture or architecture. In that particular post, what I was wearing was directly inspired by my love of art. I can’t speak for African designers as that’s a very generalized category – but I would say many of them may have also been inspired by the local art spheres which surround them.’‘ 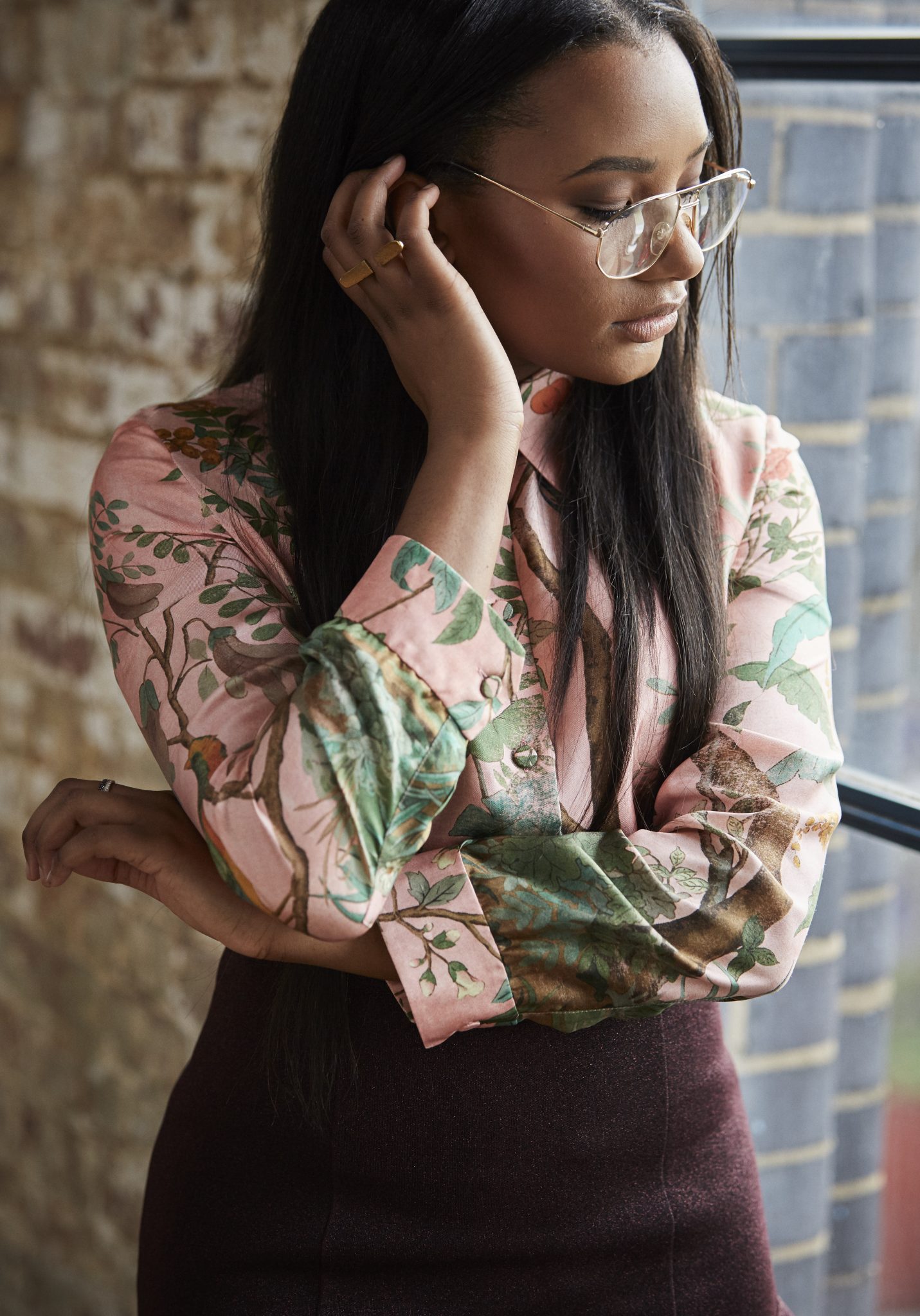 The emerging fashion industry in Africa is comprised of designers creating from their primal influences/sub cultures which translates into an ecosystem of diverse representations and identities. Often times, these identities are juxtaposed with the aim of communicating an appellation for the African aesthetics. In most cases, rather than liberate the scene by acknowledging the variations, they place confines in them. Temi finds these attempts a bit odd,

“This first issue I would say and have repeatedly said is that we need to stop conflating ‘Africa’ as a term, and not only in fashion. I wouldn’t even know where to begin if someone asked me to categorize ‘African aesthetics’. Focusing on Nigeria specifically, I would say our contemporary designers (Orange Culture, Maki Oh, Bridget Awosika etc) all have different identities and characteristics as separate as if you were describing Western fashion houses (Chanel, YSL, Balmain).” 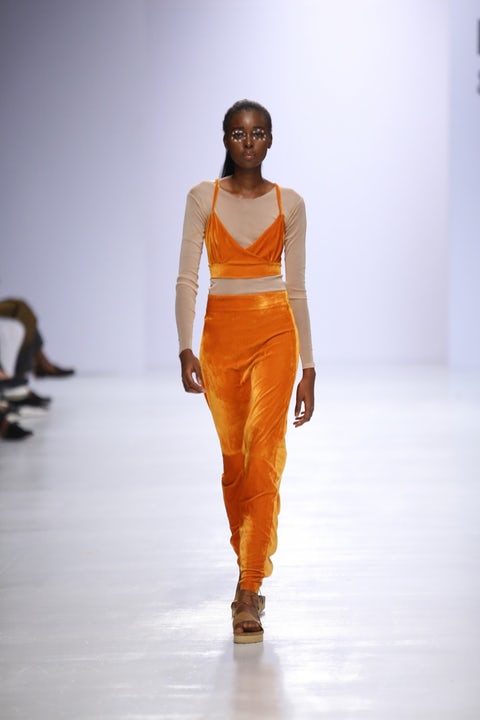 Rather than place the industry in a box, perhaps documenting the changes we see across sub-cultural spheres would leave behind a more succinct description of our present fashion timeline.

Amongst many other things, Temi is an advocate for women empowerment; recognizing Oprah Winfrey and Michelle Obama as some of her inspirations. She expresses her admiration of their contributions towards women empowerment around the world.

I think the world needs powerful, female role models. What I most love about these women is that they are not looked up to because of superficial reasons, and their value has not been defined by their association with men.

Temi strongly believes that women shouldn’t be subjected to conventional roles by societal standards, but they should be allowed to choose for themselves, be something more for themselves. For her, it’s always about value, meaning and leaving a mark. If it doesn’t inspire someone positively then her work is not done. She also relays this philosophy to her brand regarding her input in the lives of women who follow/support her platform,

“In no way would I want anyone to view my platform and simply want to copy what I do. Instead, I hope JTO Fashion offers an insight into my personal opinions and interests that shows the different tonalities of a modern Nigerian woman”.

She takes the journey of JTO Fashion one month at a time, working on her immediate goals of building a YouTube channel and organizing another ATIA [Afternoon Tea in Ankara]. Temi takes us through the idea of her event which held in London on the 27th of February 2016, revealing a possible iteration here in Nigeria.

”ATIA is an event which aims to give youngsters an invaluable insight into creative industries by awarding them the opportunity to partake in a range of useful and relevant activities as well as networking events. The chief purpose of ATIA is to provide much needed backing to the efforts of emerging ethnic talent within fashion and the wider media. I sincerely hope that ATIA will be coming to Nigeria in the next year or so, once I have finished university in the U.K.”

I always assumed that the life of a blogger is one accompanied with endless endorsement packages, loads of clothes, footwear and of course fashion show tickets; certainly my time with Temi compels me to reassess my opinions.

In the final moments of our interview I poised a question I have been itching to ask; With fashion shows being about the glamour, allure, the emotional charge of the moment and extravaganza, has a fashion show ever made you cry?

I’ve never cried at a fashion show, but certainly felt emotional. I would say the closest I’ve come to crying was the Louis Vuitton F/W 17 show at the Louvre, but that was mainly because the space (the Louvre Galleries) was so epic to me as an Art History student.

The Effort To Curb Domestic Violence in Africa

How it Feels Like to be Drug Tested by Nigerian Parents: First-Hand Accounts.