ECONOMY IS DOWN AND MR ZUMA JUST RESIGNED

by Richard Ogundiya
in Uncategorized
0 0
0

While many of you were sleeping, Jacob Zuma, an economic populist with no formal schooling, a man connected strongly with the country’s dispossessed, imprisoned for a decade on Robben Island along with Mr. Mandela resigned as the President of the South African government – notably the most appreciated valentine’s day gift ever. 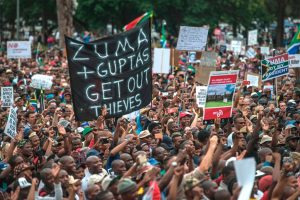 While many argue that Zuma is a failed president, many others adjoin that his legacy is a weakened South Africa. Not too surprising for a man who once said his party [A.N.C] was more important than the nation itself, adding that it would govern South Africa until Jesus returned. Uhh, when is that again?

During his nearly nine-year presidency marked by scandals, controversies, mismanagement and corruption, the A.N.C (his political party) and its members still rallied behind him as their leader until a few months back after they asked him to step down. Yesterday, Zuma appeared on national television twice. In his second interview, he declared his resignation with ‘immediate effect’ leaving Cyril Ramaphosa (his deputy, who was elected leader of the A.N.C at a party conference in December) as the acting President. Amidst Cyril’s triumph, it’s still significant to note that he has a mighty mess to clean up, otherwise he falls too. 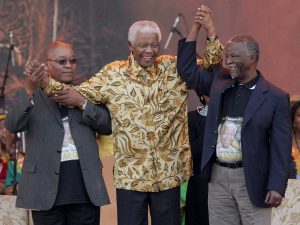 Before Mr Ramaphosa can even begin to tackle many of the structural problems that hobble growth, such as a poorly educated workforce and inflexible labour markets, he will have to clean up a government that has been marred by corruption at all levels (and we know what happened the last time Savior Buhari attempted this experiment in Nigeria). Clearing the rot will not be as simple as removing Mr Zuma.

Ramaphosa will also have to take on powerful factions at the top of the ruling party to fire incompetent cabinet ministers and battle a culture of graft that has permeated right down to local councillors. He risks splintering the party should he move too quickly. But when Mr Ramaphosa steps into the presidency he will be able to tap a deep well of goodwill that he earned in his previous careers, as a trade unionist and then as a businessman. In less than two months since Mr Ramaphosa became head of the party, South Africa’s currency rose to its strongest level against the dollar in almost three years.
Ramaphosa remains acting president until his expected election in parliament later Thursday in Cape Town and swearing in by the chief justice. 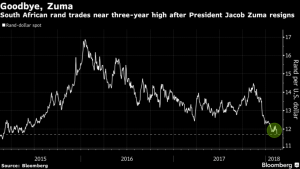 A lawyer and one of the wealthiest black South Africans, Ramaphosa, 65, is widely expected to adopt business-friendly policies, prompting the rand to rise more than any other currency against the dollar since his election as ANC leader on December 18.
But before we experience the turnout of things, I’ll leave you with this quote from Ralph Mathekga, the author of ‘When Zuma Goes’: “South Africa’s downward trajectory cannot be blamed on Zuma alone, he is, after all, just one man and part of a much bigger system’.

THE NAKED TRUTH: A JOURNEY TO SELF LOVE BY ANJOLA FAGBEMI [TheBejewelledBud]